Serving the L.A. Pagan community since 1999! 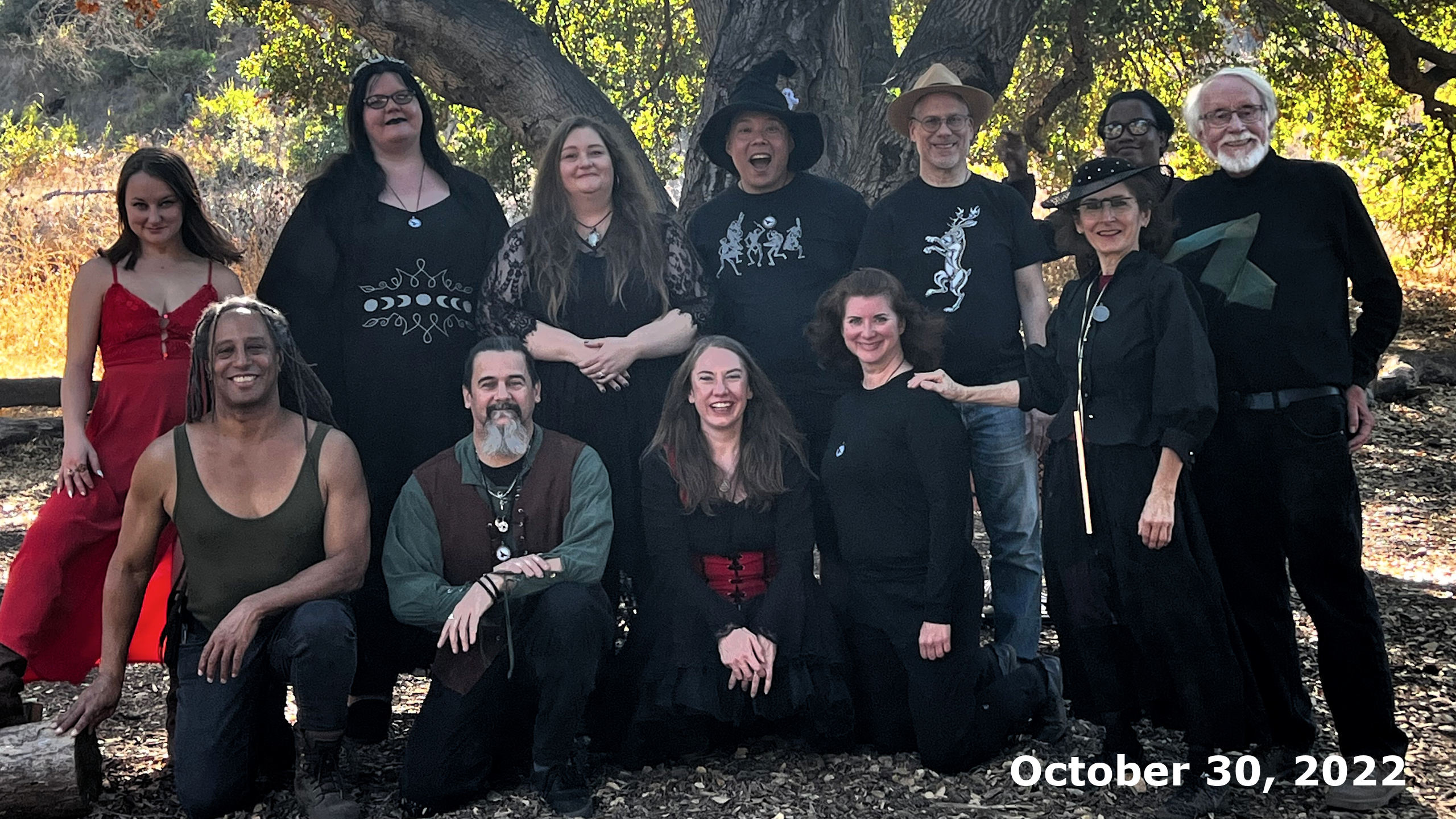 Raven’s Cry Grove, ADF, (RCG) was founded and officially approved as an ADF Protogrove on July 22, 1999, as submitted by the Grove Organizer, Todd Covert, (aka Ravenbard). The grove happily sponsored their first event, a workshop given by ADF Vice-Archdruid, Skip Ellison, on October 7, 1999. On December 18, 1999, a private ritual of dedication was held with twelve members present. The Protogrove’s first public ritual, celebrating Imbolc, was held on January 30, 2000, and was attended by 45 people.

On September 9, 2000, bylaws were adopted and an application for a Provisional Grove Charter submitted. This request was approved by ADF on November 2, 2000, granting “Grove” status within the organization. With this development, RCG was then granted tax-exempt status as a nonprofit religious organization by the State of California. This status was conferred on January 17, 2001.

Raven’s Cry Grove held its first festival, Three Realms: A Pacific Druid Gathering, October 17-20, 2002, at Sage Hill Campground of the Los Padres National Forest. The newly elected Archdruid of ADF, Skip Ellison, was in attendance as were members of both the local Pagan community and ADF Groves and Protogroves in five states.

From 2000 to 2005 the majority of the grove’s public rituals were held at Raven’s Flight, a pagan shop in North Hollywood. Other venues were used as well throughout Southern California, particularly in the San Fernando Valley area. In the Grove’s overall history, as many as 90 people have attended a single public ritual with Raven’s Cry Grove. With the subsequent closing of Raven’s Flight and the Black Broom, venues have varied in the area as seasonal rites have dictated.

Between 2001 and 2003, significant accomplishments occurred among the grove’s membership. The Senior Druid from the RCG’s inception to Samhain 2004, Todd Covert, served in various capacities in ADF including the following: 1) In 2001, elected to ADF’s board of directors as the organization’s Administrator; 2) In 2002, granted clergy credentials as a Dedicant Priest by ADF; 3) In 2003, elected as the “Non-officer Director.” Ravenbard retired as Senior Druid of RCG late 2004 and was granted Senior Druid Emeritus status. Meredith Mc Donald joined the Mother Grove as Members Advocate in 2003 and served later as the “Non-Officer Director” of the ADF national organization.

Don [Modig] Hopkins was elected as the second Senior Druid in the Grove’s history on October 30, 2004. He helped the Grove move through its first period of major transition. As happens in all organizations, changes, growing pains, and challenges to meet new needs arose. After six years of service to RCG, Todd Covert left the grove and ADF to form The Druid Academy. Meredith McDonald was called to form a new ADF Protogrove, Awen’s Breath Protogrove, ADF. Modig stepped down from the position of Senior Druid at Samhain 2005.

Nicole [Calliean] Harlow was elected to the position of Senior Druid on October 30, 2005. Nicole also serves as ADF’s Southwest Regional Druid. In addition to annual elections at Samhain 2005, new by-laws were also passed in order to better meet the needs of the membership. The grove’s executive committee increased to five members from the previous three. Nicole Harlow stepped down from office in July 2006.

On August 1, 2006 Z. Lisa Bennett, RCG’s Pursewarden and Dance Guild Chief of ADF, was elected to the position of Senior Druid. Refining the grove’s vision of excellence, community, and service, and taking further steps towards its realization was the focus of 2006. Private full moon rites were adopted and held regularly, and membership levels were enhanced in order to better mentor new members, to provide a greater scope for development of existing members and to acknowledge elder members for their contributions. Three Realms, held at Malibu Creek State Park, celebrated its fifth year and was very successful.

In 2007, Raven’s Cry Grove sought to bring new energy and direction to its outreach projects and to create a first year Apprentice Program to support new members who wished to pursue a course of study in the essential basics of druidry, ritual, trancework, and divination. The grove was delighted to receive The 2007 ADF Founders Award conferred upon us by Issac Bonewits and ADF for our outstanding service to homeless women and children in our community. The grove also instituted Annual Earth Day Rites for grove members and invited friends to spend additional time working with and energizing the Land. Our first year-long Apprentice Group began their studies on November 18, 2007, looking toward their first circle initiation the following year. Our Dedicant’s Group, Bardic Group, and Warrior’s Lodge continued to serve grove and ADF members, and the 6th Annual Three Realms Festival was the best ever at its new comfortable, private, and pagan-friendly location in Paso Robles at Dancing Horse Ranch.

2008 brought a significant growth in membership, so the focus of the grove’s work turned within, toward developing more occasions among its membership to grow, share in private ritual, and strengthen fellowship through a number of enjoyable activities. Leadership development and creating additional leadership opportunities, where there was a need, were also in their infancy stages. The Bardic Group was strengthened under the leadership of our Bardic Director, Riversong, and our first round of 1st circle Apprentices were initiated on October 28, 2009. In keeping with the focus, the Three Realms Festival served this time as a private retreat, rather than a public event, for the grove and other members of ADF in the Southern California area.

In 2009 the focus continued to be to provide meaningful, intrinsic experiences for our membership while seeking to provide quality public rituals to bring the pagan community together on the high, holy days. Additional leadership in the council, viable membership, and a new group of Apprentices bode well for the growth and longevity of the grove. So far, our initiates have stepped up into leadership positions both in the grove and ADF, a Women’s Group has been formed, and more work on Pathworking, as ritual preparation, is expected. A look at developing how specific committees would be helpful and empowering is in the works. The grove installed The Four Treasures of Ireland, as a legacy to the grove, as we celebrated our 10th year anniversary at our public Lughnasadh rite, August 9, 2009. Three Realms was a private retreat in Paso Robles and our Apprentice Candidates were initiated in November.

Another Apprentice class was initiated in October 2010 and the Grove continued to grow into 2011. A change in leadership structure to separate spritual and business attentions saw Lisa Bennett become Grove Priest and Mike Talvola Senior Druid. Mid 2011 saw another significant change in Grove direction as Lisa left Raven's Cry to follow her spiritual calling. At a retreat at Malibu Creek SP in October, a new Grove structure was designed and put into place. Direction of the Grove is entrusted to the membership at large rather than with officers and council. Focus of Grove activities is toward presentation of public rituals with excellence while maintaining social and educational opportunities. Membership structure is simplified to reflect an egalitarian organization. Shelby, Russell, and Ren were chosen for the honor of being recognized as Elder Members for their ongoing contribution of talents and efforts to the Grove.

In 2012 and 2013, Raven's Cry Grove gained members and is looking forward to more outreach to our community and Facebook friends in addition to continuing our tradition of excellent public ritual. Meg and Kaila were chosen by the Executive Council and Grove to be honored as Elder Members. As the Grove has continued to evolve, we began to meet between rituals for a truly enjoyable combined social time and ritual preparations on a Saturday or Sunday afternoon.

Our grove has continued to grow and to present public rituals with more and more guests, so as of June 2015, we have 20 local members. Our Spring ritual counted 60 people, our greatest number for regular rituals. Jackie and Darin became Elder members last year, and Sara and now Ariel have also been added to our Elders, our way of honoring their continuing service to our grove.
CLOSE THIS SECTION